Bringing the curtain down...

After 10 years and 161 reviews I've decided to stop. The Facebook page will go but I'll keep this one online just for archival purposes or if for nothing else that scathing review of the Stray Cats' 40 album hahaha. I enjoyed it for many years and tried to inject humour into most of the stuff I wrote but my heart's not in it anymore. What was once enjoyable had become a chore. Thanks to everyone who ever read any of my reviews and to Mad Music For Bad People who brought my words of wisdom and mirth to a wider audience through their magazine. To the record companies and bands who sent me stuff for review - a lot of which wasn't on my radar and I would never have heard only for them. I hope my ramblings encouraged some of you to buy music and support thee most underground and excellent scene. Maybe I'll be like Restless and announce I'm heading off into the ether and then come back 5 minutes later hahaha... but I doubt it! So with that said - slán agus beannacht.

DeadBeatz "Meet Us At Dawn" 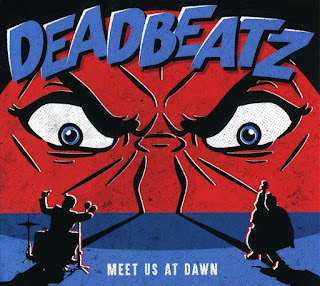 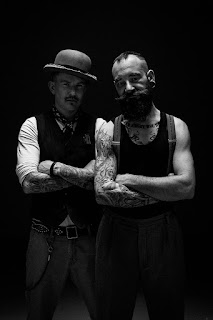 Too blues to be punk - too punk to be blues! That's what visitors to the Austrian duo's Facebook page are greeted with! It hits the nail on the head alright. Consisting of drums, harmonica and a slap bass (for that twist of rockabilly) the boys are unlike any other combo doing the rounds. Yet with such a minimal ensemble of instruments, the sound is powerful, in your face boppin' blues with a raucous delivery. Rockin' Blues for the neighbourhood juvies! I remember an Irish busking band from years ago called Dead Plants that released a couple of albums back in the late 90's/early noughties. DeadBeatz kinda remind me of them. Only the stripped back "nice" feeling you get with the skiffle of the Plants is replaced with the feeling you get when you walk into a backstreet tattoo parlour in the dodgier end of town. Excitement and danger. The sounds on here are gritty, slap bass-drenched edgy blues with enough bop to appeal to the (non-purist) rockabillies and with enough energy to be accepted with open arms by the psychobilly brigade who are anything but purists like their rockabilly cousins. You can snap up the album directly from the band via their bandcamp page. It's available on both CD and coloured vinyl with no two the same! Put that in your collector's pipe and smoke it (and brag about it on Psychoholic!).
The O'Prez
DeadBeatz Official
DeadBeatz Facebook
DeadBeatz bandcamp
Hellacious Harmonies on Facebook
Posted by The O'Prez at 8:12 PM No comments: 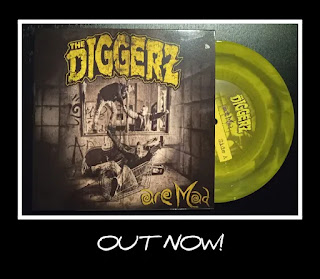 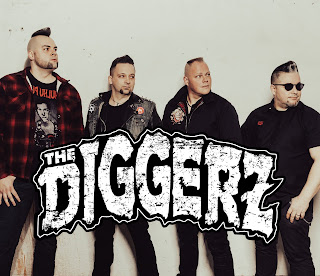 Jaysus it's been so long since I reviewed a record that it's taken me the best part of an hour to remember how this thing even works. But here I am, back again, after over a year's absence with me trousers down around me ankles as I shake my fist vigorously at the screen whilst taking in the aural delights of the sexy new EP from The Diggerz. Now a quartet with the addition of a second guitarist, Mo tells me their sound is fatter. I heard him wrong at first and thought he was body shaming me again! He wasn't complaining when he was eating the almonds from betwixt my moobs though. The dirty fecker! But anyway, enough teats and nuts related jovial japes. He tells me their new album is at the pressing plant with a planned release date for June 10th this year. Now then, this new release sees a departure from their 2015 album A Psycho's Tale on Crazy Love Records. Fuck me, 7 years ago! Did you see me adding links there? The things I do for you ungrateful shower of shites. It's not a departure as-in, fuck me, they're shite now. Au contraire! The psychobilly sound and non-run of the mill melodies are still there but the sound is more powerful, more rock'n'roll if you will.
It's a fuller figured Diggerz. A BBW of rockin' beats! Psychobilly with curves! Our Mo can sing and shies away from hiding behind the usual sore throat fare employed by the legion of DAG knock-offs. The backing vocals are on point too which adds to the sonic diversity of this EP. The musicality is pristine which makes me think I should just sell all my instruments and stick to what I'm good at - never being as good as these boys.  The highlight for me is their version of Drunken Sailor. A stomping rendition which unexpectedly turns dark towards the end before a bit of ska is unleashed and then kicks us up the arse again before the finale. You can get your greasy digits on the EP from Sick Taste Records. It's a limited edition of 200 so stop looking at Pornhub and buy it. No wonder your digits are greasy! 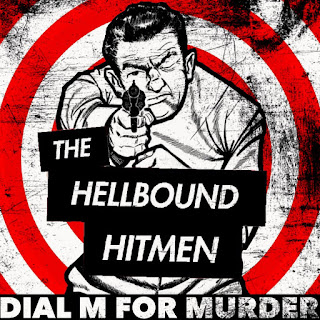 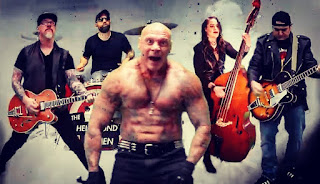 Right then, looking at the head on Billy Moonbeam I better not say a bad word about this album. A frontman that's the epitome of pant-soiling aggression with a life story that more than fits the image. It's actually not an image! You can tell by the lyrical content that the man is writing from the heart; from either experience or stories told during his 18 year stint in the big house. The quintet hail from New England on the north east of the US of A and this is their first long player following on from their two singles "Dial M For Murder" and "Dragstrip Hero". Formed in 2018 from members of The Uglies, The Rockaholics, The Guts and Satan's Teardrops, it's quite the pedigree and melting pot of influences. So, what do they sound like then? Skim a stone across a lake and with each touchdown you get a blast of either psychobilly, manic rockabilly, punk'n'roll and everything in between. Vocally young Moonbeam reminds me of Charlie Splatterhead from Los Gatos Locos. With that said, I get a definite Los Gatos Locos influence throughout the album in that The Hellbound Hitmen are also of the same sonically and lyrically hostile, belligerent mould. Psychobilly can go either way...tongue firmly in cheek or fist firmly in jaw. This album is the latter. I approve!
The Hellbound Hitmen on Facebook
Buy the album...
Hellacious Harmonies on Facebook
Posted by The O'Prez at 9:47 PM No comments:

Saint Dom And The Sinful "Bopperella" 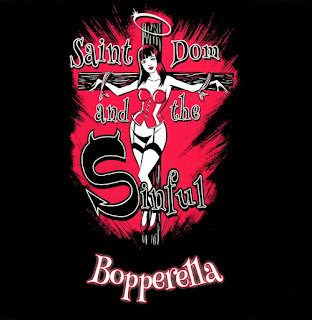 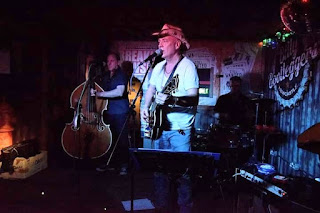 What a class act! I have the side of me leg slapped to a pulp playing the imaginary bass to every boppin' little ditty. It's actually just dawned on me after saying that that the album title is perfect for the sounds within. We all get to take a breather on Life Goes on though. A lyrical masterpiece. Actually, as I've come to expect from Dom, lyrics are not something this man takes lightly. He's quite the wordsmith. A melodious troubadour par excellence. Of course they're no 1950s throwback ensemble. They play their brand of rockabilly with blatant disregard for any kind of formulaic authenticism. Of course, I love that! I've always preferred a more neo approach and these boys bring that approach to the fore. It's a slap happy twangaton with hairy bollocks-drumming! Oh yes, the entire thing is one big melodious, feel good, feral onslaught on the auricular cavities. (The boys can sort you out with a physical CD of the album and below are links to all the download/streaming sites. For a physical copy contact em either through Facebook or email em here!).

Labels: Saint Dom And The Sinful

Tasteless "Rotten To The Core" 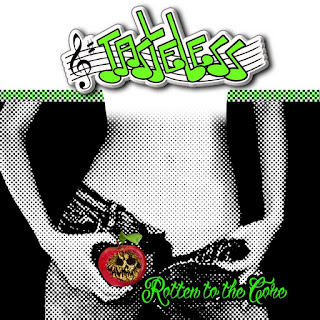 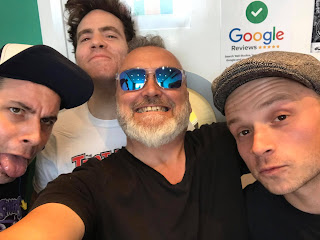 I barely had time to recover from the priapism-inducing first slab of wax from these boys than they go and unleash their second EP of neo rockin' resplendency. In a relatively short space of time they've risen through the ranks of their neo rockabilly cohorts to become thee numero uno ensemble within their chosen genre. Seriously lads, you couldn't make it up! This is just more quality from the quartet of adroit artistes. Finely honed musical skill with a dollop of contemplative lyrics make for a listening experience second to none. I'm just wondering if guitarist Loz Hawkins has 10 fingers on each hand! And yes, the final track is a neo rockabillyocean cover. But it's those originals where the boys shine. I'm just gagging for a full length (ooooh matron!) release. I've had enough of the tantalising teasers! In the meantime, use those sausage fingers and head on over to their bandcamp page and snap this one up before it disappears into the ether. Because it will! 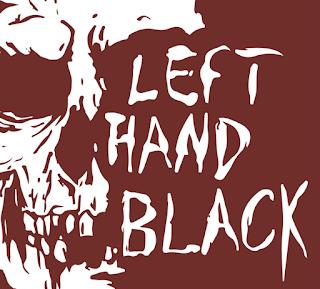 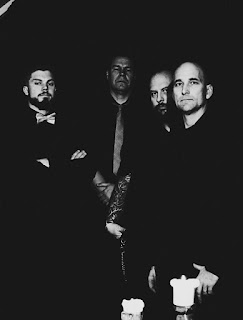 From the remnants of The Dead Next Door, come Gothenburg's Left Hand Black with their début self titled album on Wolverine Records. Available as digital download, digipak CD or LP. The LP version is sexed-up with the inclusion of the CD, poster and lyric sheet. Now that that's whetted your appetite, what do the quartet sound like? Well, with a track listing which reads like the video nasty section of your local video store from days of yore, you pretty much know what to expect lyrically anyway. But then again, this is horror punk we're taking about so quelle surprise. My press release blurb states the members having a liking for outfits such as The Misfits, Bad Religion and The Ramones. They've been plying their wares since Spring 2019 so wasted no time in unleashing this beast of an album. What I've always liked about horror punk is the songs are usually short sharp shocks. There's only one song here over the 3 minute mark. They're the kind of songs that in essence leave you wanting more. So instead, to satiate your appetite you just listen to em over and over again. Whether this was a deliberate tactic or not I don't know but the formula works. Melodic singalong verses and choruses abound throughout. You know, thinking back to the aforementioned musical influences, you can definitely hear em. The boys have concocted a selection of songs that become immediate ear worms. Think the catchiness of some of the best work by The Spookshow with the vocal stylings of Blag Dahlia and you're half way there.