The Retarded Rats "Underground Is Dead" 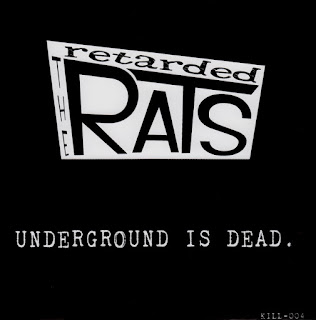 Underground Is Dead (Extended Radio Chart Version)
One - ? - Three
Underground Is Dead (Real Life Version)
Blurring the lines between psychobilly and garage punk. That's the sonic delights to be gorged on on this limited edition 7" EP from Germany's Retarded Rats. Fronted by slap bassist and vocalist par excellence, Anna Killjoy, and bringing up the rear is Flatty Killjoy on guitar and Mutant Ann on the skins. More often than not, female-fronted psycho outfits are way off the mark. Annoying vocal styling and music that falls in to the "punk with a double bass" variety. The Retarded Rats however are bang on the money. What a breath of fresh air to hear a girl-laden psychobilly band that isn't relying on gimmickry to gain popularity but instead rely on the sound. Isn't that the way it's supposed to be? Yeah, a cool image is one thing but isn't worth a shite if the music falls short. The Retarded Rats tick both boxes. They look good AND they sound good. If you took all the singles that were released on the Big Beat label back in the 80s...both psycho and garage punk...melted em down and re-pressed em as one great big 7" slab of black sexiness then this is what you'd get.
The O'Prez

THE RETARDED RATS
BUY THE RECORD!
HELLACIOUS HARMONIES ON FACEBOOK