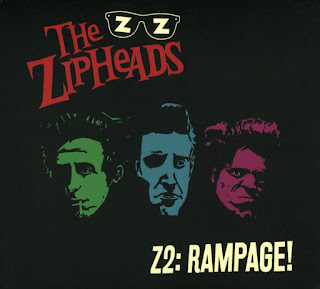 'Twas back in 2011 when I first came across the St. Albans trio The Zipheads. Between 2011 and 2012 they released a few digital only (I think) teasers of what they were all about. Coming with the classic psychobilly constituents of slap bass, drums and guitar but with a unique image, I liked em immediately. They released their début album "Prehistoric Beat" in 2013 and 2015 saw the release of their "Just Don't Seem To Care" 7" on The Western Star Recording Company label. So now in 2016 the lads are about to release their sophomore album in November. It'll be available on 180 gram magenta vinyl and CD digipak. My good mate Simon Nott sent me an advance copy for review purposes. So, psychobilly constituents aside, this is no psychobilly album. But it's not the much maligned "punk with a slap bass" either. It's too clever and well constructed to be that. What it is is melodic punk rock with equal parts punk and rock with a power rockabilly backdrop. 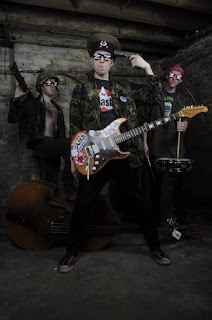 Cast your minds back to when The Living End hadn't strayed from their rockin' roots. It's kinda like that. It reminds me in parts of Saturnalia-era Long Tall Texans too. I don't want to call their music punkabilly as it doesn't do it justice. It's too broad ranging to be any one thing. It's rock'n'roll with a fanny-load of influences. It's all in there. I mean good rock'n'roll. Not what the media call rock'n'roll. Rockabilly, punk, new wave, rock, little bits of ska and swing here and there. You know, good fucking rock'n'roll. Add to the music some intelligent lyrical content and you can't go wrong. Don't expect to like it straight away though. I didn't. I actually love when that happens as I know I won't get sick of it all within 5 minutes of hearing it and put it back on the shelf-o-shite for evermore. As a lifelong psychobilly aficionado, I really appreciate bands like The Zipheads who slot in to our scene and keep the whole thing fresh and original. This album is both of those things. I'll update this with links to purchase the album when it becomes available on November 11th. In the meantime though, check out The Zipheads Facebook Page, bookmark their Bandcamp page and bookmark the Bomber Music page while you're at it!

Updated with links to purchase/pre-order: