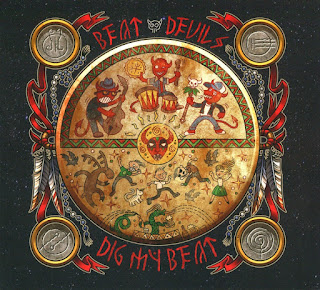 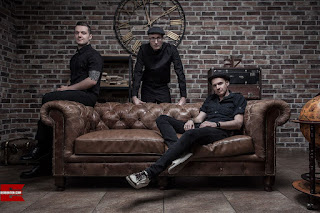 The Beat Devils are a class act. There's no two ways about it. They're the kind of band that never disappoint with their releases and this is no exception. The boys play that perfect blend of neo rockabilly and psychobilly that I instantly love! Good songs can be let down by shit production when it comes to anything with "billy" on the end of it. Especially the slap bass sound. The bass sounds excellent here and drives each song in a way that makes it impossible not to slap your leg in time and have a big satiated grin on your gob. The guitar is clean, reverby in all the right places and played faultlessly. The drums are blended into the mix to perfection adding to the infectious beat. The vocals are reminiscent of The Stringbeans (especially in the pronunciation department). It's blatantly obvious that the boys are steeped with influences from the neo/psycho outfits that came out of Europe in the mid-80s but instead of trying to recreate that sound, they take the essence of it and add their own energy and take it off in a direction that's both refreshing and contemporary. There are three neo covers on here which really prove the point I made about those influences. Absolutely excellent versions of songs by the Polecats, Ratmen and Wigsville Spliffs. The boys have written some instant classics on here but they haven't rested on their laurels and just flung in a few note-for-note covers to fill out the album. They've put (Tribute) beside the song titles because they've reworked those songs and made em so Beat Devils-esque that if you didn't already know the songs you'd think that they penned them. They work seamlessly with the Beat Devils originals. I could wax lyrical about this album for another three paragraphs such is my enthusiasm for what the band have produced here but I think you get the gist of it. Plainly put, "Dig My Beat"? Too fuckin' right I do!
The O'Prez

The album is available to pre-order now on both vinyl and CD and a whole gamut of different packages/colours are available. It's available on all the streaming/download sites too for all you futuristic/impatient/lazy bastards. You can check out the Beat Devils Facebook page for links but I might add some here because I'm nice that way.