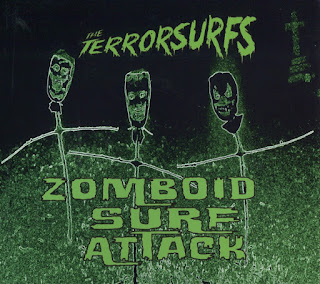 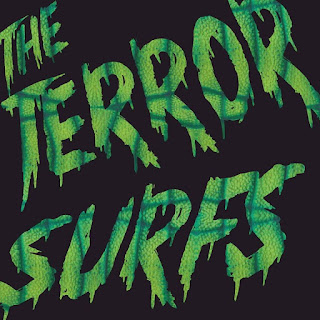 Hot on the heels of the début single "Surf Bomb" comes the début album "Zomboid Surf Attack" and I've been shimmying around the sitting room in me grass skirt ever since its arrival. On an ironing board. Released on Sharawaji Records, it's available on limited edition CD in sexy digipak and digital download for all those impatient bastards that don't see the attraction of having 4.7 inches of pleasure in their hands. I know a CD is 4.7 inches because I measured one with my shlong. Form an orderly queue ladies. Anyway, now that I've seduced everyone, there are riffs aplenty to be had here and oodles of twang. Intermingled with the surf freak-out material are some very dark, atmospheric tunes, sometimes straying into spaghetti western territory. Now while the more uptempo tunes are indeed surf, it's not your typical happy surf. This stuff has a menacing edge to it. The three lads have combined their talents to produce an album that has quality stamped all over it in every respect. They really do put the power in to power surf. Their stage presence also matches the sounds emanating from their speakers to a tee. Click on the links below to check out these boys and buy the album and support one of the best power surf bands to come out of England since....power surf became a thing!